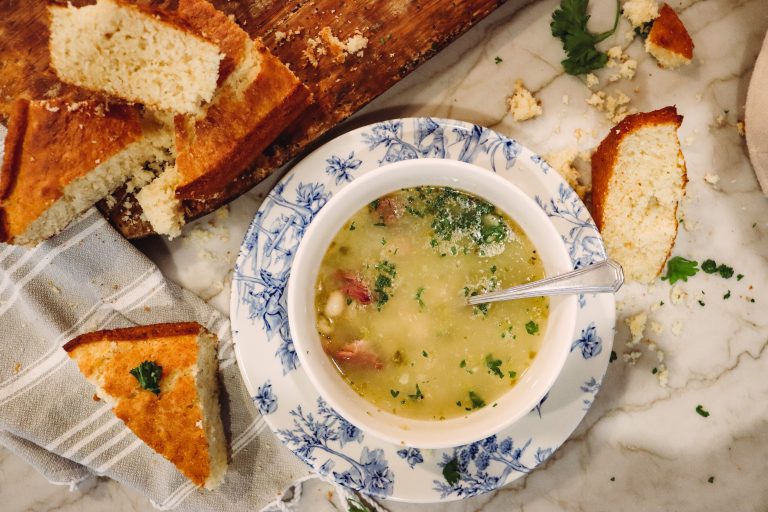 Today is National Homemade Soup Day. Who knew? Amy Dant is known for cooking delicious breakfasts for our guests at The Homestead,  but she also holds lots of secret recipes in her back pocket, one of them being Senate Bean Soup. It’s a cozy feel-good recipe and perfect for cold winter days.

Amy’s grandmother, Susan Dant or as she called her, “Grandma Sudie” got the recipe from the Cissy Gregg’s Cookbook published by The Courier Journal newspaper dated November 1, 1959. Cissy Gregg was the food columnist for The Courier Journal for over 20 years until she retired in 1963. U.S. Senate Bean Soup is said to be served in the senate dining room every day in a tradition that dates back to the early 20th century. The recipe is the exact one clipped from the magazine all those years ago.

A hambone with some meat on it

Put the soaked beans, hambone and water in the soup kettle. Simmer slowly for  2 hours. Add mashed potatoes when the beans are half cooked and stir until thoroughly mixed. Add onions, celery, garlic, and parsley. Simmer an hour longer. Remove the hambone. Chop up all the pieces of meat and return the meat to the soup before serving. This quantity is supposed to serve 6.

The potatoes must be the secret. The soup is thick and smooth but lacks the strong beany flavor other bean soups can have. It seemed like a lot of celery, but it wasn’t and we used large bunches of it. There was no salt or pepper called for, but we added a lot of red pepper and seasoned it with salt according to our own taste. Serve it in the largest soup bowls you have, and then they will be back for seconds. 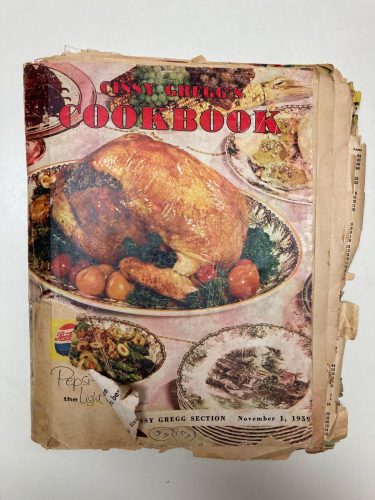 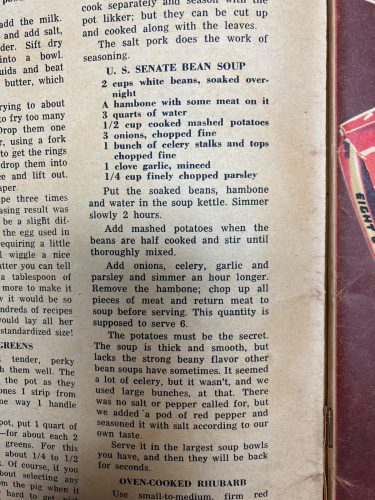 If you have questions regarding our Bed & Breakfasts, please email us at Stay@dantcrossing.com  or call 502-917-0207.

Log Still Distillery neither owns nor has any affiliation with “J.W. Dant” distilled spirits.

If you have questions regarding our Bed & Breakfasts, please email us at
Accommodations@DantCrossing.com or call 502-917-0225.

If you have questions regarding our
Bed & Breakfasts, please email us at Accommodations@DantCrossing.com
or call 502-917-0225.

Smoking and Firearms are banned at The Amp
and across the Dant Crossing campus.  •
©2021 Dant Crossing
225 Dee Head Rd., Gethsemane, Kentucky, 40051